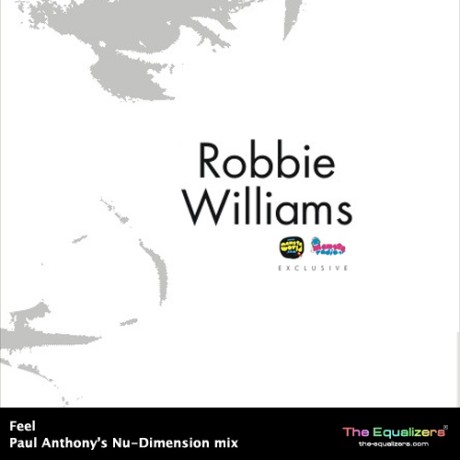 Below the new remix of Robbie Williams by Paul Anthony in its Nu Dimension edit!

Paul Anthony said: “I always wanted to have a groovy version of this song, and this is what came out…
Many many thanks to Manolis Stavroulakis (MANSTA) & Vasilios Madoulidis for the artwork!”

Robbie Bio:
Robert Peter “Robbie” Williams (born 13 February 1974) is an English singer-songwriter, vocal coach and occasional actor. He is a member of the pop group Take That.
Williams rose to fame in the band’s first run in the early- to mid-1990s. After many disagreements with the management and certain group members, Williams left the group in 1995 to launch his solo career. On 15 July 2010, it was announced he had rejoined Take That and that the group intended to release a new album in November 2010 which became the second fastest-selling album of all-time in UK chart history and the fastest-selling record of the century.

“Feel” is a song by British singer-songwriter Robbie Williams. It was released on December 2, 2002 as the lead single from his fifth studio album, Escapology. The song became an international hit, reaching the top of the charts in Austria, Germany, Hungary, the Netherlands, and top five positions in countries such as Denmark, Ireland and the United Kingdom.